It is one o’clock in the morning, total darkness. I am on a riksha on a dirt road heading for Auroville. When the “driver” stops I see nothing but the menacing shadows of tall trees. In the morning I discover to my surprise that I have been sleeping in a dense tropical forest. I walk along innumerous unmarked paths, around me small jungle animals, heaps of fallen leaves, and from afar the sound of cars whizzing on the main road.

Auroville is a strange, unique place – a fascinating encounter between people, cultures, ideas, topographies and climates. I found my way with the use of a free map handed out to the visitors, and a motorbike sans helmet, visiting a cousin who had recently been accepted as a community member. He teaches body consciousness to children, recycles waste, turns feces into rich compost, grows plants, collects rainwater and produces solar energy.

Auroville is a city in making – a cooperative settlement with spiritual orientation, founded 40 years ago on an abandoned piece of land in the state of Tamil Nadu in south India. It has about 2000 members, half of whom are Indians and the rest from countries around the world, including 10 Israeli families. The city was founded in 1968 by the Mother” – Mira Alfassa – a 90—year-old Egypt-born parapsychologist, who had started her way as a poet and artist in Algiers, and later on founded the spiritual group L’|dee Nouvelle with her first husband Henri Morisset.

With her second husband, Paul Richard, Alfassa went to India where they befriended the poet and philosopher Sri Aurobindo, with him establishing the journal Ariya. From then on, the synergy between Alfassa and Aurobindo was central to their ‘Tves: she coined the term ‘New Consciousness’ and Aurobindo lent it meditative depth under the name of Supramental Consciousness.

n the 30s, after having spent some years in Japan, -‘tffassa returned to India – this time to live with -‘turobindo. Together they established the Sri Aurobindo Yoga Center which they directed till his aeath in 1950. During that period they had also envisioned the “City of Peace and People of the Future” where they would live forever. The connection between Aurobindo’s contemplative soul and ecological concepts has been central to -‘luroviIle’s existence. In the first stage Alfassa, together with architect Roger Anger, founded a center for integral yoga in Gojrat. In the 70s she established, with partner Michel Montecrossa, a European model of the future city, Mirapuri, in Italy; a village with a similar orientation in Germany – Miravillage; and a center-guesthouse for integral yoga – all three of which served as the ideological basis for the founding of the ecological city of Auroville.  Aware of her advanced age (she died 5 years after laying the cornerstone of the city), Alfassa appointed Roger Anger chief architect to continue the planning and building of the city. Anger gave her abstract ideas a direct interpretation and divided the city into 4 areas of function: the international zone for people of the world; the culture zone; the industrial zone; and the residential zone which actually spreads across the city in a large number of closed, defined communes initiated by a single person or a group.

In the center of the city is Matrimandir – the Soul – a golden sphere-shaped temple for meditation and communion. In the center of the temple there is a crystal sphere standing on four golden stars of David, possibly homage to Alfassa’s Jewish origin. Auroville is by definition an ecological city – a place where everything is recycled, from food to feces. A green belt that surrounds the city is used for agriculture and the restoration of the near-extinct rain forest – a declared goal of the city.

Administratively, the city is run by volunteer inhabitants, and the communal life resembles a kibbutz that has undergone some degree of privatization. Apart from realizing the philosophical ideas of Alfassa, the developing city of Auroville is a laboratory for the testing of concepts imported from around the globe to the special terrain and climate conditions of the area.

The temperature in Auroville, between 26 and 40 degrees, is wet and humid. During the year there are two rainy seasons – winter monsoon and summer monsoon – with months of nearly unceasing rain. Vast quantities of water pour down on the houses, streets and fields eroding organic earth that is vital for agriculture. The planners have to calculate the amount and strength of the rains, to direct the water flow and to channel it into reservoirs. The inhabitants, as an ecological community that does not use pesticides, suffer from a multitude of mosquitoes, ants, scorpions, snakes and air- onditioning is used minimally, they try to employ all possible methods of entilation.

insects existing there. Since Co-existence with the other “partners” of the habitat requires improvised creative solutions. One of the gravest architectural problems is the termites. Free from pesticides to restrain them, the termites multiply boundlessly, devouring all organic materials including houses. A house that is uninhabited for a short while is attacked and demolished – hence the constant search for building solutions.

Alfassa defined Auroville as a place for cultural, spiritual and architectural experience. Indeed, very architect who reaches the city sees its rich potential for research and experimenting. Building is not solely the domain of architects, and the contribution of the inhabitants to the variety of building styles is large. The inhabitants employ any possible ecology-oriented method of building, articularly for fighting the termites: building on trees, on poles, over water pools. The cheap and ready labor force is a paradise for experimenters who exist in Auroville in abundance. At first, the ecological idea was grasped mainly symbolically. One may still see houses of massive concrete, painted with earth-colors, which try to “grow from the ground”. Gradually other building modes have developed or been adopted, such as the Tamil kit – swaths of coconut leaves woven in three layers – proven to work in the monsoon rains and to be airy in the soaring summer temperatures.  Auroville borders on many Tamil villages, some of which are inside the city parameter – altogether a good potential for expansion in the future, provided that Alfassa’s kibbutz lasts long enough to become the City of the Future as she had envisioned. 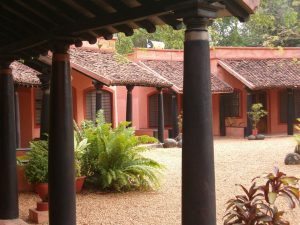 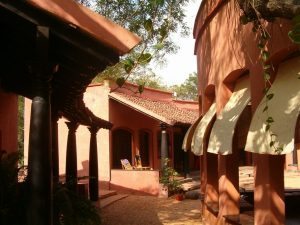 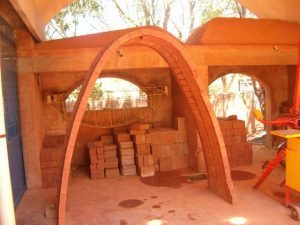 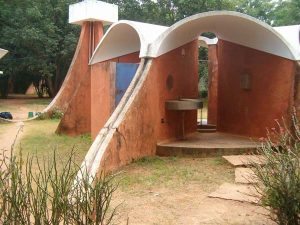 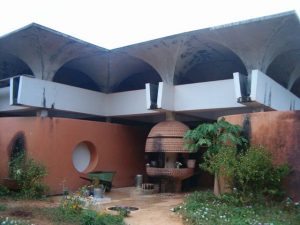 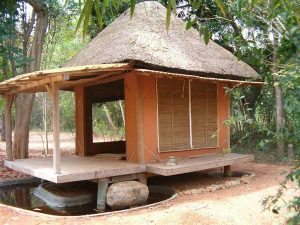 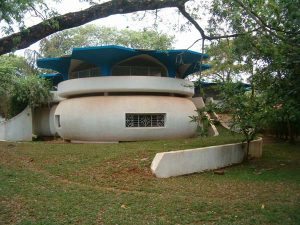 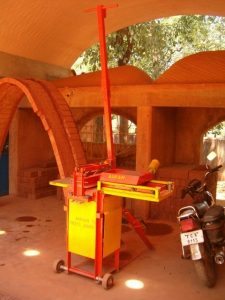 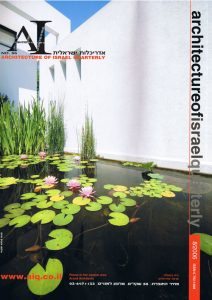