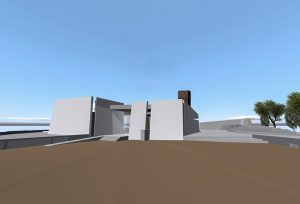 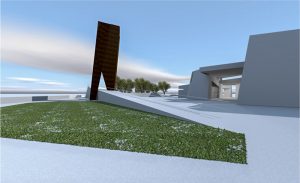 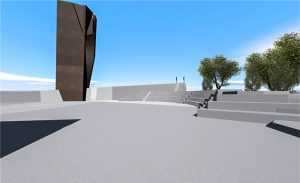 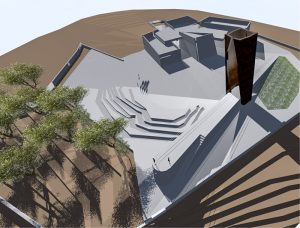 As part of participation in the public competition in August 2002.

Description of the principles of planning – “David’s Victory”

The design of an experiential spatial element, the thesis of the spectator’s transfer to the perceptual, mental and ethical process. The visitor is not a passive observer but an active participant in the realization of the architectural experience. The concept of the complex is coherent, all the elements in the site jointly create the memorial and serve together in conveying the experience and the message. 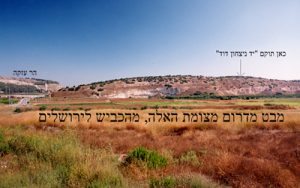 from the intersection to the exact location.

Conceptual Background:
The story of David’s victory over Goliath conveys value messages at various levels: the basic level presents the idea of ​​a small victory over the great, at the deepest level the conflict between two levels of faith, the “grasped” belief – based on the sensory system, “- the one that is beyond the senses.
David, serves as a platform to change the perception of reality and to strengthen the faith of the people of Israel by transferring them to a different set of beliefs. As a result, the idea underlying the design concept is: The movement in the complex is intended to convey to the visitor a mental-mental process similar to that undergone by Bnei Yisrael, a process of breaking the conceptual concept and strengthening the belief in the unimaginable.The manner in which this process is implemented is architectural planning based on a conceptual-visual illusion, which gives the participant a process of change: at first the tower is perceived as a whole, large and threatening object. The disillusionment with the perceptual illusion creates a catharsis that leads to a change in consciousness regarding the belief in something that is hidden from sensory reality.

Planning the architectural structure:
The structure of the galleries, the lecture hall and the offices, is in fact composed of a number of low buildings, arranged according to the logic of labor. One axis connects the parking-entrance-tower and reveals a view toward the complete and complete side of the tower (the “Goliath” axis), while the second axis (the “David” axis) opens from the reception area and the inner amphitheater towards the beginning of the platform. Interior design and height The reception space and central space – 4 meters, but later “axis of David” varies and opened up to a height of 5.20 meters.
The front-end design of the building relates both to the gathering and the fear of the Israelites. “And the people of Israel gathered … when they saw the man and fled from him, and were very afraid” (1 Samuel 16: 1), and to strengthen the sense of growth and belonging to the land.
The finishing materials were chosen from a pragmatic approach to strength and climatic resilience and from a symbolic reference: the structure will be combined with a coarse coarse stone, with a delicate white stone.

The Tower (Goliath):
The height of the tower is 16 meters and the surface is 4 * 4 meters, the finishing material is copper and the tower is slightly tilted to the north, as part of a design concept of detachment from the ground. In three dimensions facing the rest of the elements in the complex, the tower is perceived as incomplete and sealed while in the hidden dimension, the tower is presented differently – naked, torn and peel.
Delay within the tower embodies a clash between two opposing experiences: on the one hand, the height of the height and strength of the tower, and on the other, the illusion of the power of the tower begins to shatter as a result of the distinction in its emptiness and the wall in the hidden dimension.

Platform (walkway):
The Platform takes place in two dimensions: In the conceptual dimension, the platform is the basis for the concept of conceptual change and the presentation of the dimension of the intangible and the physical dimension. The platform is a central router in the visitor’s path of the site.
The platform axis is built from west to east, crosses the tower and ends with a view towards Jerusalem.
The platform starts at the zero level and ends at a height of 4.2 meters at the observation point, creating a slope that is hidden in the southern part by an amphitheater that serves the ceremonies area.
Eight meters before the vantage point, steps leading to the forest planted on the eastern slope of the dome begin and lead to the conclusion of the walkway on the site. The finishing material is a delicate white stone in the cut.

The idea of continuity:
One of the principles anchoring the concept is the principle of continuity.
There are several motifs in the complex that express the continuity of the story and its connection to the future:
– The royal motif, reflected in the peak of the embankment, in the design of the observation deck.
– The motif of Jerusalem The city of David is expressed in the concluding observation towards Jerusalem.
– The motif of rooting in the soil is reflected in the forest planted at the eastern foot of the dome.

Back to competitions> Projects You can click on the link